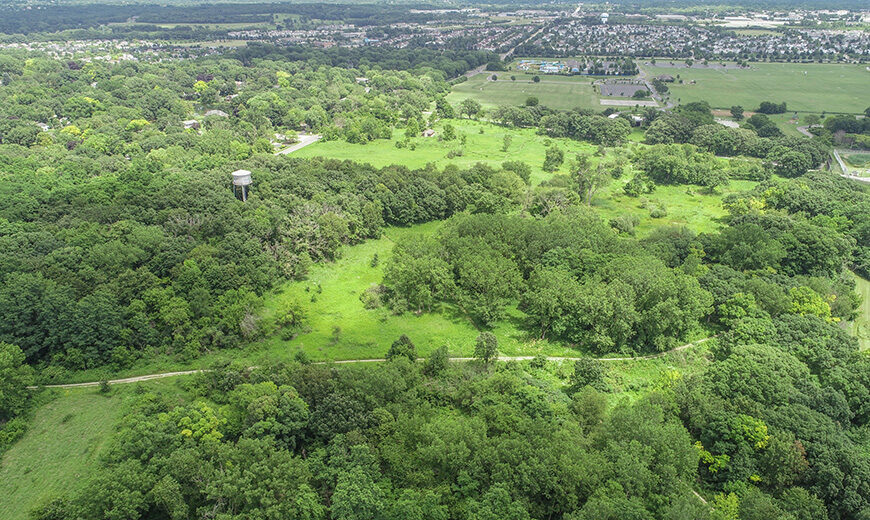 While it’s the recreation that often gets the spotlight the St. Charles Park District recently earned accolades for its conservation and care for open lands.

The St. Charles Park District was awarded the Best Green Practices Award from the Illinois Association of Park Districts. The award recognizes the park district’s efforts to maintain 11 natural areas totaling more than 400 acres. These areas include diverse parcels consisting of prairie, woods and marsh.

The award is a tribute to work started in the 1990s with a vision for restoring an area back to its natural habitat, explains Pam Otto, outreach ambassador for the St. Charles Park District. Residents, along with the park district’s first naturalist, saw potential in reclaiming the land then known as Campton Hills Park.

Today that land is Hickory Knolls Natural Area and one of the 11 natural areas managed by the St. Charles Park District. Much of the work of caring for the land, carefully removing invasive plants while promoting the soil to its natural state, is done by volunteers. Last year volunteers logged more than 1,000 hours helping with land care and many volunteers have been with the park district for more than 20 years.

“They each contribute and make a difference in their own way,” Otto said. “Today as they look out at the natural areas, many can feel a sense of accomplishment.”

Another key component to the work has been the opportunity for residents of all ages to learn more about the park district’s efforts to conserve and restore the habitats.

Often, the education is through fun activities, games, said Laura McCoy, nature education program supervisor. Whether it is through summer camps for children to single-day classes for adults, she enjoys watching participants engage with nature and walk away with a greater knowledge and appreciation for the land.

“They’re going to understand the value and ultimately help care for the environment,” McCoy said.

At a time when people are seeking time outdoors and rediscovering nature, Otto said the park district’s efforts and master plans to preserve and restore these areas offers residents a tranquil escape.

“These locations are very accessible. One can enjoy them on a lunch break or while taking a walk,” Otto said.

And even as we move into cooler, wetter months there is still plenty of ways to enjoy these spaces. Absent the allergies, annoying bugs now is the perfect time to put on some warm layers and rediscover nature, while appreciating the foresight of those who believed the land was worth preserving for future generations.