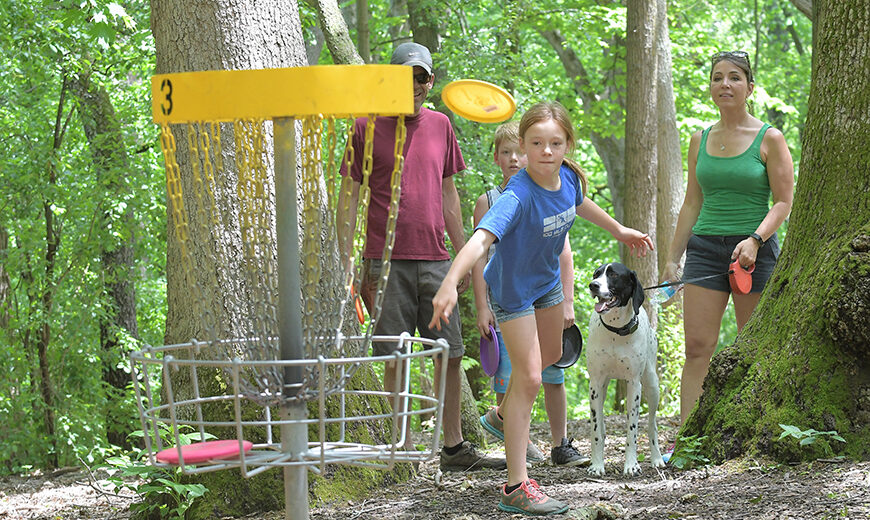 Many residents may equate spring sports with baseball, soccer and tennis, but for a growing population, springtime is the dawn of another disc golf season.

Fortunately for local players, James O. Breen Community Park is home to a 9-hole disc golf course, tucked into 6.4 acres of wooded landscape and naturally rolling terrain on the north side of Campton Hills Road, west of Peck Road.

“Whether you play for competition or recreation, disc golf gives you an opportunity to explore new parks while engaged in a structured physical activity,” said Steve Gard, St. Charles Park District Youth Programming Supervisor, who also regularly plays disc golf. “It’s so easy to make it a fun family outing or regular weekend activity with friends.”

Disc Golf vs. Traditional Golf
Disc golf, which started in the 1970s, is considered one of the fastest growing sports across the globe. Played in more than 47 countries, the Professional Disc Golf Association reported it had more than 41,000 active members worldwide in 2017 – up from nearly 12,000 members 10 years prior. It’s estimated that 8-12 million people have played the game at least once.

Disc golf has many of the same elements as traditional golf. Players follow a designated course that typically consists of 9 or 18 holes, throwing special discs down a fairway into elevated baskets. The player with the least amount of throws at the end of the game wins. Similar to golf clubs, players use different discs – drivers, mid-ranges and putters – based on distance, speed, trajectory and the player’s skill level.

Unlike traditional golf, however, there is no greens fee — a large draw for many players and families alike. The only cost is equipment. On average three-disc packs are $15 in local sporting goods stores.

Thousands of courses exist across the country, with more than 100 in the Chicagoland area, and courses continue to pop up in the far western suburbs at a rapid rate. When the course at James O. Breen was built in 2005, it was one of the first of its kind in the area. Now there are at least 12 more in the area from Maple Park to Glen Ellyn and Batavia to Elgin.

Disc Golf for All
The course at James O. Breen, or Campton Hills course, as it’s known in many directories, is open from 9am to dusk. This summer it will receive a facelift with new signage at the start of the course and at each tee.

Jeff Goodrich, Assistant Superintendent of Parks, said the course has remained popular over the years, especially after school and during the summer in late afternoons and on weekends.

St. Charles Teen Center Director Darby Beasley said they include disc golf as a teen activity in the summer, providing instruction and equipment.

“It’s appealing to this age group, because it’s not as difficult and disciplined as traditional golf but it has many of the same elements,” Beasley said. “It’s also free which is a huge perk for teens.”

From children to seniors, disc golf is a lifetime sport. “You’re never too young,” said Gard, adding many families with younger children play scramble or best throw to practice and quicken the pace.

Surrounded by Nature
Some players may find the James O. Breen course challenging, as they navigate trees in the fairways and hike the hilly terrain, but there are many perks to playing in this wooded environment.

“The wooded setting also gives you the sense that you are engulfed in nature, and that, in and of itself, has so many health benefits,” he added.

Research shows that spending time in nature can help improve mood, sleep and concentration, and lower stress and anxiety. Coupled with the physical act of playing disc golf, from walking the course to throwing discs, players are strengthening bones and muscles, and getting their heart rate up.

Gard encourages families to include a round of disc golf while spending a day at James O. Breen, which features the Otter Cove Aquatic Park, Hickory Knolls Discovery Center, playground, dog park and more.

“The park has so much to offer, so explore the different amenities and include disc golf,” Gard said. “You don’t have to be an expert; just enjoy the company, learning a new skill or challenging your current skills and have fun engaging in a sport surrounded by nature.”

Powered by RecCentric
Scroll Up