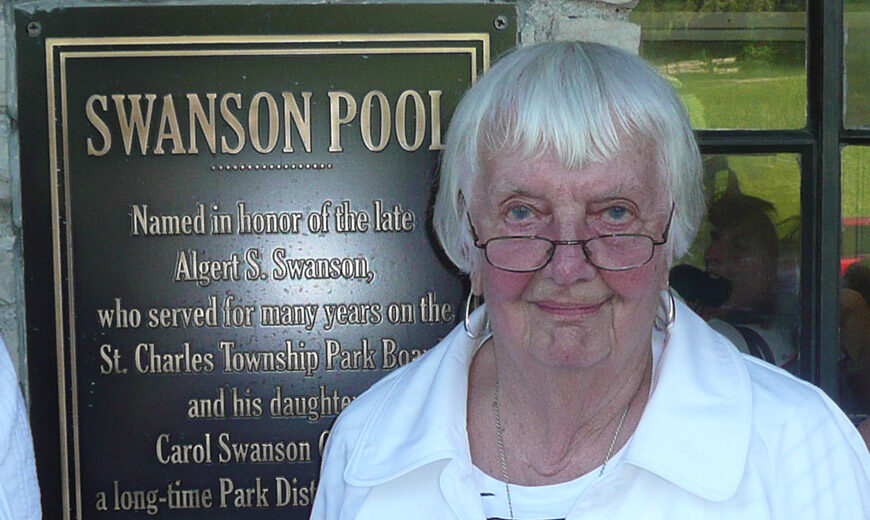 Carol Swanson Glemza, 97, passed away peacefully on August 31, 2021. She began her St. Charles Park District career at a very early age, worked for 69 years and continued as a volunteer well into her retirement. She holds the record for the most years of service at the District as well as in the entire State of Illinois Parks and Recreation history.

Glemza began working for the Park District in August of 1942, a few years after construction of the Pottawatomie Pool was completed. The pool was made possible due to a government grant that Glemza’s father, Algert Swanson, helped obtain. The $367,000 grant was one of the largest awarded at the time and enabled the Park Board to complete the golf course, swimming pool, amphitheater, ball fields and stone bleachers in Pottawatomie Park.

One of Glemza’s happiest memories she often fondly recalled was the day the Park Board received a telegram confirming that St. Charles would receive the grant money as this public improvement project provided much needed employment opportunities for the community during the times of the Great Depression. In June 2009, the Park Board officially changed the name of Pottawatomie Pool to Swanson Pool, to acknowledge the generous and long-lasting contributions made by both Carol and her father for so many years.

Over the years, Glemza served the Park District in many capacities. Initially, she began by working summers as a cashier and manager at the pool. She then went on to help keep the Park District’s accounting books. In the mid-60s when the Park District established a partnership with the Henry Rockwell Baker Community Center Board, she was hired on full-time becoming first a business manager and then an administrative assistant to the director. While she did take time to spend with family and travel a bit during her retirement, she continued to volunteer endless hours at park district activities, for the St. Charles Park Foundation and with the Baker Community Center. At her retirement in 2011, Peter Murphy, former President and CEO of the Illinois Association of Park Districts, confirmed Glemza as one of, if not the only, employee with 69 years of service in parks and recreation.

“Carol will truly be missed”, said Parks and Recreation Director Holly Cabel. “She was one of those rare individuals with such community spirit and a passion for sharing her love of parks and recreation.”

The St. Charles Park District plans to pay tribute to Carol Swanson Glemza in honor of her years of dedication to the St. Charles community with a memorial near the Baker Community Center.