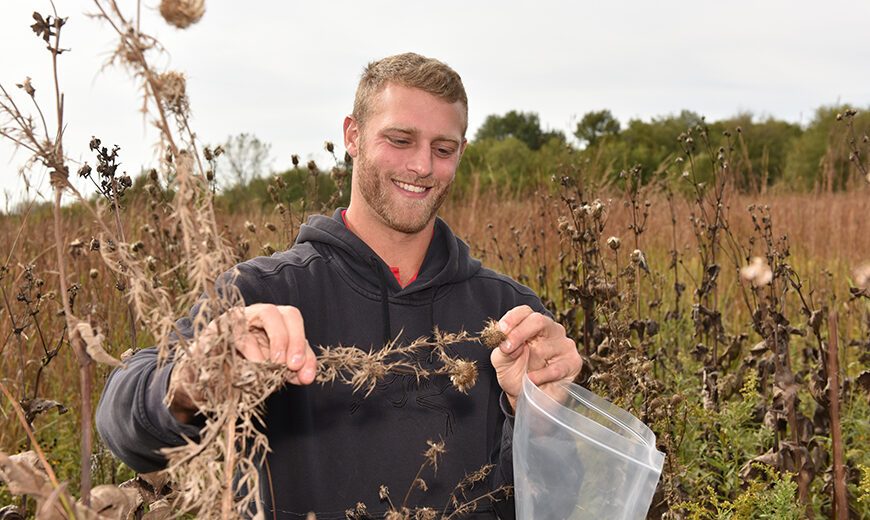 Sometimes even Mother Nature needs a hand. And while a park district is often thought of for its playing fields and playgrounds, the St. Charles Park District has a small team devoted to the care and conservation of 500+ acres of natural area with the three most well-known areas including Ferson Creek Fen Nature Preserve, Norris Woods Nature Preserve and Hickory Knolls Natural Area.

Ryan Solomon, ecological restoration supervisor for the St. Charles Park District is leading the charge to repair damage from invasive plants to the Ferson Fen, a process that is taking root seed by seed. And while there’s still a long way to go in the process, this past year he’s seen signs of hope, as seedlings grow, and birds and insects return to the area.

“I’m floored with how much we’ve been able to do,” Solomon said.

To understand the process, here’s some basics. The Fen, a state-designated nature preserve, uses groundwater to create a peat-forming wetland – a very unique habitat. In the early 2000s this area fell into degradation due to excessive number of invasive species.

To the untrained eye, it may be hard to understand the need to keep invasive species out of the fen, but the implications have a rippling effect on the area’s plants, wildlife and even humans. For example, cattails, a type of plant often seen near wetlands, are not a native species. These and other invasive plants leave no space or suitable habitat for the native species. Because they lack a deep root structure that does not provide erosion control, they do not act as an efficient filter for cleaning the rainwater as it makes its way to the Ferson Creek and the Fox River. This allows rainwater, with its pollutants, such as salt from the road to enter the waterways.

“There is an intrinsic habitat and ecological balance,” Solomon said. “To remove the invasive plants and rebuild with native plants that will support birds, reptiles, fish, amphibians and insects, which are the base of the food web, it’s all interactive.”

The need to care for the fen isn’t just for the wildlife and plants, as humans depend on the fen too. The creek is meant to swell and taken in heavy rain waters. When the fen isn’t working properly, and the creek banks continue to erode leading the area to flood on the roads and nearby homes.

Before Solomon was knee deep in plants and seedlings, he recalls his high school days where he was a three-sport athlete who didn’t quite know where he wanted to go with his career. He liked math and science and thought civil engineering would be a good path of study, but after his first year at University of Illinois in Champaign-Urbana he realized it wasn’t the right fit.

His college advisor suggested a different type of engineering based on his interests. He earned his degree in natural resources and environmental sciences, with a concentration on fish and wildlife preservation and conservation.

“In my free time I love to kayak, camp and fish,” Solomon said.

After removing the invasive plants with hand-mowing and multiple applications of herbicides, he began the process of re-introducing native plants, but this step wouldn’t prove to be easy.
“I can’t just call a nursery and ask for plants we need. It isn’t allowed because this is a state designated nature preserve, INPC management protocols include preserving local genotypes meaning plant material put into the fen must contain genes with a local eco-type,” Solomon said.

After gathering and germinating seedlings from native plants that were able to survive through the invasive encroachment, he discovered they weren’t well-suited to survive as the plants lacked necessary genetic diversity to develop into viable plants.

“This was setting up the site to fail, we needed to get some genetic diversity to promote a stable and resilient ecosystem,” Solomon said.

He needed permission from the Illinois Nature Preserve Commissioner for his plans to seek seeds through a web of networks from other nature preserves or nearby remnant wetland areas with specific native plants needed for the Ferson Creek Fen site.

It would take many phone calls, emails and conversations to attain access to the seeds he would need, and then re-start the process of germinating the seeds into seedlings, some of which he could plant and some he would further grow in some rented space at a local nursery to be able to have slightly larger plantings. He was able to collaborate and obtain seeds from Big Rock Forest Preserve in Kane County, Spring Lake Forest Preserve of Barrington in Cook County and Lake in the Hills Fen in McHenry County Conservation District.

Places like Ferson Creek Fen Nature Preserve may not have been conducive to human practices such as agriculture or development, however, they play a crucial role for preserving biodiversity and providing ecological benefits to the surrounding area, Solomon said.

“From the bees and insects that depend on native plants to the area’s ability to take in water, aid in flood control and provide healthy waterways for fishing and recreation use, the hardest part is educating the community how important these areas are to daily living,” Solomon said. For more details on the fen renovations and improvements, visit stcnature.org.

“Right now, it’s taking a lot of effort to turn the place around, but as the years go by hopefully it won’t be as intensive, and we’ll reach our goal of a nature preserve that’s a high-quality functioning ecosystem,” added Solomon.