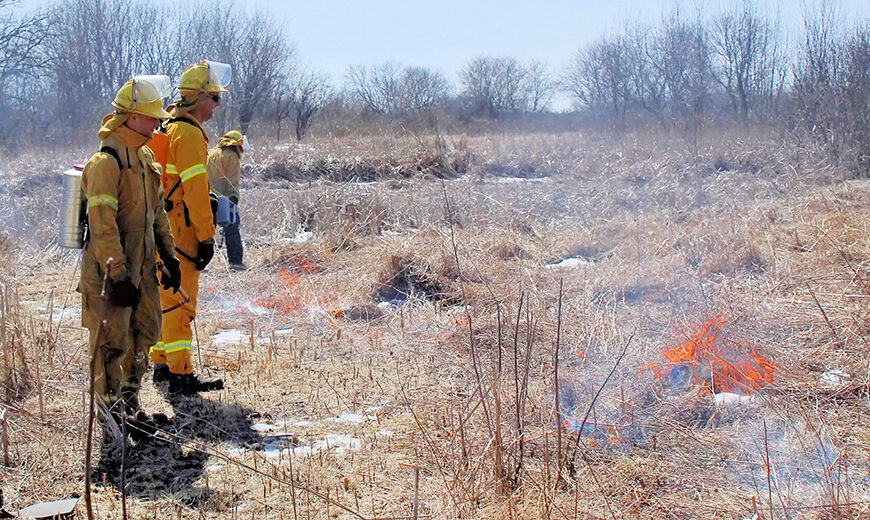 Conducting a controlled burn in any of the park district’s 415-plus acres of natural areas is a complex process and dependent on numerous environmental conditions. Temperature, precipitation, humidity levels, wind speeds and wind direction are just a few factors that all have to align in order for the burn to happen.

She stressed that even though the park district plans for two burn seasons — one each in the fall and spring — the conditions may not allow for all or any of the burns to take place.

“I want residents to understand that we burn the best we can with the time allotted and focus on our priority sites, our high-quality sites,” said Voegtle, who is also a certified prescribed burn manager, licensed through the Illinois Department of Natural Resources, and required to be on site during controlled burns.

Just as important, she said burning the same section every year is not always recommended. “Every three years is good or every other year for larger areas such as Hickory Knolls,” she said.

A controlled or prescribed burn – the deliberate process of applying fire to natural areas that are fire tolerant – is a fairly new science that is constantly evolving, Voegtle said, but it is conducted to restore the health of the ecosystem.

For example, prairies have evolved with fire and many native plant species are fire tolerant, but the non-native weeds are not. Burns help remove invasive and non-native plants such as garlic mustard. “Killing off 95 percent of garlic mustard from the prairie through a controlled burn allows all the plants in that ecosystem to better compete,” Voegtle said.

Controlled fires also help with nutrient recycling. The ash from a fire is incredibly rich in nutrients and minerals and get recycled back into the soil. This, along with more sunlight and warm soil, allow the plants to sprout more vigorously the next growing season.

In advance of a controlled burn, the park district will notify residents and businesses in the area.
Postcards will be mailed, and adjacent businesses will receive a call the day of the burn. Additionally, signage will be put along roads near the burn site and/or within parks to inform guests.

The day of the burn, park district staff will prepare the site. If, for example, residential homes neighbor the burn area, the park district will mow around those areas to create burn breaks, preventing the fire and smoke from harming residents’ trees and other landscaping.

“We have to think about the heat, not just the flames,” Voegtle said. If there are pine trees next to the burn site, the radiant heat would brown out those trees and kill the needles even if the flames don’t touch them, she explained. Therefore, crews will mow to create a buffer between the site and the residential properties.

Voegtle said the number of staff onsite during a burn depends on the size, complexities and conditions. “Some controlled burns require three crew members, but others need more than 10,” she said.

For more information about controlled burns within the park district, contact Voegtle at jvoegtle@stcparks.org.